Don’t look if you are squeamish.

On my first day staying with Julie in this new place, she took me to a daycare not far from this quaint town.  The website mentioned most of the requirements for the kind of place where I usually hangout  when Julie goes to work.

I am really particular of where I stay and Julie knows it! For 10 years now, I have been to some terrific daycare facilities in Red Deer, Calgary and Edmonton in Alberta; Kamloops, Williams Lake, Cranbrook, Armstrong, Vernon, and Vancouver in British Columbia; London, Huntsville and Markham in Ontario; Middleton in Nova Scotia.

Julie searches for places with as many of the following services and features as possible:

When we lived in Annapolis Valley in Nova Scotia, I got to stay at a farm where on blizzard-like days, we ran in the horse training arena! In Vernon, I stayed in an open concept bunk house where we had bunks – real bunk beds where I was always in the top one. One place in Calgary had a HUGE open warehouse where we played and they took us in a bus to Nose Hill Park or Sue Higgins Park everyday for hours of running and swimming.  There were water features at both places!  In Red Deer, after I had surgery on my shoulder, the daycare helped me regain strength by teaching me to walk and eventually run on a treadmill.  That was fun!  Ever since then, Julie buys a treadmill for me wherever we live.

Every daycare makes sure there a humans with us no matter how large the park or outdoor area.  In Kelowna, I’d be with a group of 15  fellow canines who would be cavorting in the 7 acre parkland yet never out of sight from the human minder.  Sometimes there would be two humans out in the field with us. They would holler if someone got worked into a frenzy becoming a tad aggressive or starting to bark overmuch. This was always welcome as I cannot abide by rowdiness and bad manners. The human caregivers often got us practicing some skills such as stay, roll over, turn around, come when called (you would be SHOCKED to learn that so many of my buddies struggle with that skill), and lay down.

I’ve had fantastic experiences at every place across the country until this one.

It was my first day.  I could tell Julie was a little concerned when we arrived and learned that all dogs have their collars removed.  Without my collar,  Julie cannot see where I am on the GIS app on her phone that connects to the device on my collar.  I saw her frown.

The place here near where we now live has a large wilderness area that was a fantastic area for me to play!

Then it happened.  One of the dogs bit my ear taking off an entire section and exposing some cartilage. I went toward the buildings . The people who noticed me acted quickly and were very kind staunching the bleeding and trying to comfort me.  They were nice people.

She came and was annoyingly calm though I could feel her energetically elevated nearing what I can best describe as panic. I could hear her heart thudding so strongly that I wondered how her ribs were not breaking.  But outwardly, she was so calm.

The daycare person tried to find a veterinarian that could see me but it was at the end of the day and none of them would remain open.

I am thankful Julie had taken some dog first aid courses.  She went to a pharmacy buying bags of white things.  Long strips and square shiny pads.  See in one picture what she did to my head!   I look as though she was dressing me as a mummy from a horror show for Halloween. Only it is not Halloween.

Thankfully, every two hours through the night, Julie woke me to change this dressing because it was GROSS and bloody.  Yuck.

In the morning, I met a vet.  I could instantly tell that he was kind, skilled, and pragmatic!  Julie’s heart rate slowed considerably after talking with him and the other white-coat-wearing people who came in and out of the exam room.

I stayed there for the day though I cannot remember much.  I must have been sleeping.

Julie came to get me and was all smiles and hugs.  Apparently most of my ear was saved!

I am styling now.  One ear has a frill! 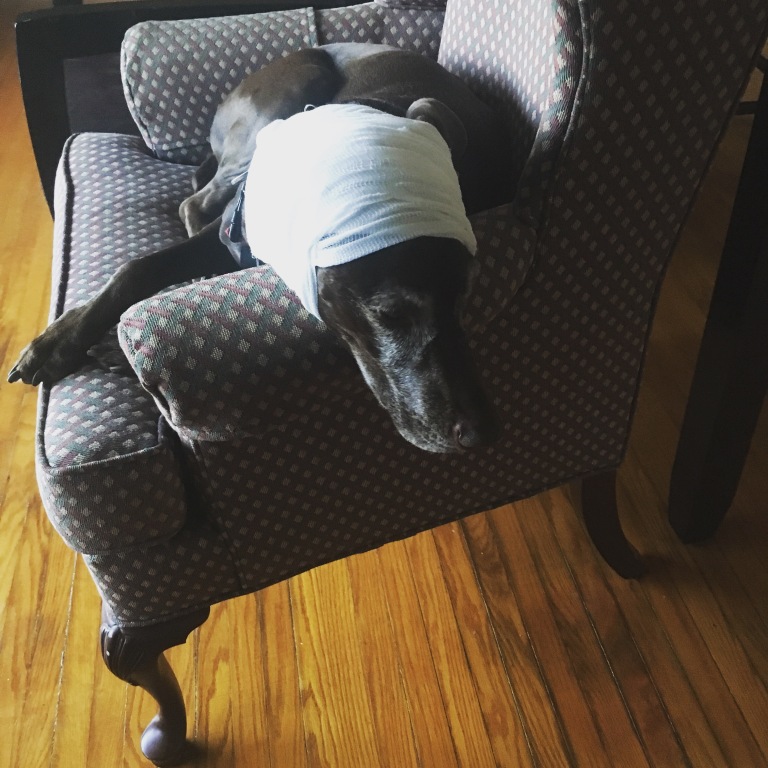